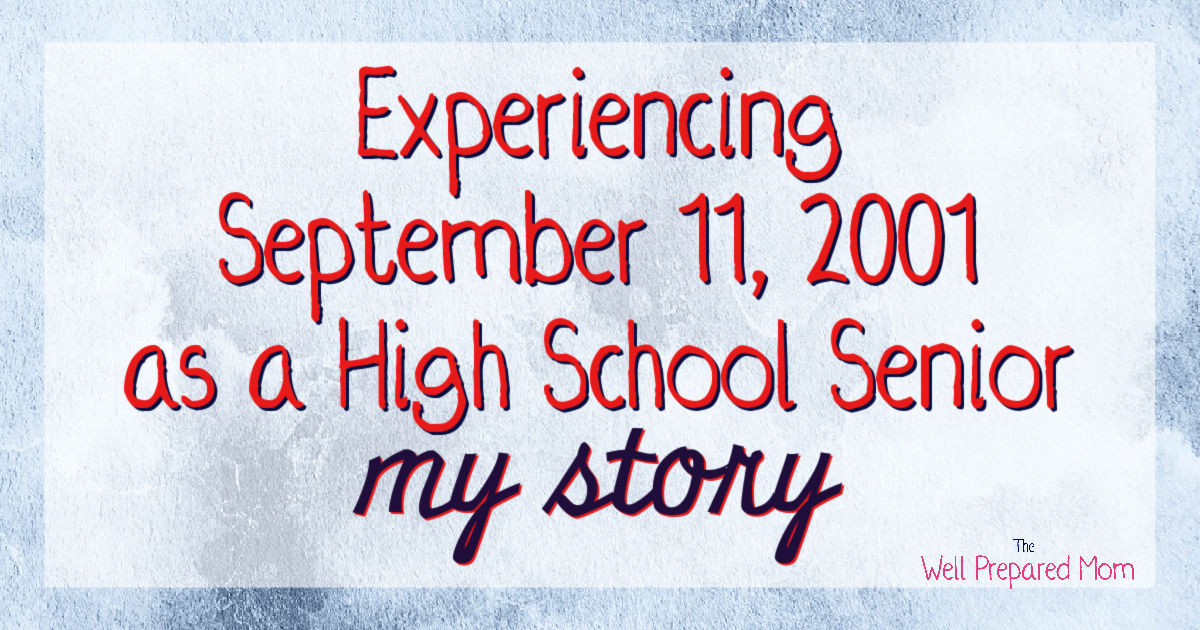 This article may include affiliate links. If you use those links to make a purchase, we may earn a commission at no extra cost to you. For more information, please see The Well Prepared Mom disclaimer here. As an Amazon Associate I earn from qualifying purchases.

It amazes me that September 11, 2001 was almost 20 years ago. I can remember the events of that day so clearly, but knowing there is a generation that has grown up knowing ONLY the world after 9/11 just amazes me. Do you remember that day clearly? Where were you living? I’m going to share my story, but I’d love to hear yours as well. I feel that sharing the stories and experiences somehow keep the memory alive of those that passed as a result of September 11, 2001 and this is not a day that any of us should forget anytime soon. I was entering my Senior year of high school, in South New Jersey, and this is what I remember from 9/11/01.

September 11, 2001 was a Tuesday. Schools in my town had been in session for less than a week. As a Senior, I was thrilled to “finally” be allowed to drive to school. Like many Seniors, I had my own parking spot at the school and was pretty happy that I no longer had to take the bus to school each morning. To get to school, I would drive down the same roads each morning and one of those roads would start at the top of a hill and steadily go down. After I crossed an intersection, I remember looking up to the sky, at the top of that hill, and noticing how gorgeously clear and blue it was. There a few crisp white clouds, but, for the most part, the sun was shining and the sky was a beautiful blue. The rest of the ride to school was pretty typical and I started the morning like all others.

After Homeroom, my first period class during Senior year was English. Even though I now write a blog and literally write for a living, I didn’t like English very much. I love reading. I love expressing myself through writing, but ask me to identify different parts of a sentence…predicate, preposition, whatever…and you’ve lost me. It doesn’t interest me at all and bores the heck out of me. I write how I talk and that seems to work for me! This morning in English, though, we would be writing in our notebooks. Though I don’t remember what we were doing, I remember, clear as day, writing out “Tuesday, September 11, 2001.” Why do I remember that? I have no clue, but the visual of my right hand writing that date has stuck in my mind ever since.

After English, my second period class was Commercial Art. One of my favorite classes with one of my favorite teachers. I have always loved graphic design and, in this class, we were learning how to do calligraphy and how to create logos, signage, and such for commercial use. We were doing our work when, out of the blue, the principal of our school came over the loudspeaker to make an announcement. He said something about a plane crash in New York and, to be honest, we brushed it off. New York City was about a 2 hour drive away and, although it was a shame that there was a plane crash, why would this accident be announced in our school? Planes had crashed before and they weren’t announced over the speakers…what was different about this one?! We continued our work and didn’t give the announcement much thought.

After Commercial Art came third period: Physical Education. Don’t get me wrong, I love a good game of baseball, but, when it comes to Physical Education I’d rather watch than actually participate. (I know can’t be alone in these feelings) And, PE in High School?! Ickkkkkk….locker rooms and showers. I mean, it’s literally what my high school nightmares are made of. Well, that and forgetting my locker combination and getting lost in the hallways. #isurvivedhighschool On this fine Tuesday, we all got changed into our PE clothes and then went into the gym for whatever activities had been planned. As I walked into the gym, though, it was different. Instead of everyone sitting in their assigned rows and spots, everyone was sitting on the floor around a television borrowed from the Audio Visual department. (Remembering this moment, chills literally just ran up and down my body). Unlike any other PE Class, the remainder of those 40-some-odd minutes seemed to both fly by and drag on at the same time as we watched the beginning of the horrendous events unfold before our very eyes.

We were trying to figure out what was going on. A plane hit one of the World Trade Center towers? And, then another plane hit the other tower? Then the Pentagon?! Why? This had to be an accident, right? Why would someone want to cause so much destruction on purpose?! Events in two different parts of the United States couldn’t be related, right? We were naive 17 and 18 year olds. We had no idea what was going on nor did we realize how the events of that day would impact the rest of our lives and the future of our country.

After both towers of the World Trade Center and the Pentagon were hit, commercial air flight 93 crashed in a field in Pennsylvania. That made it 3 areas hit all within a matter of 2 hours. All with loss of life and all seemingly out of nowhere. I felt numb. Would there be more “accidents?” If so, where would the next one be? Was we safe at school? None of us knew.

I had a family member that had been spending more time working in New York City, so I asked to go to the Guidance Counselor so I could try calling home. Remember, this was 2001 and cell phones weren’t used as much then as they were now. I had a Nokia phone, but that was for car emergencies only. I remember seeing my peers in the Guidance office as well. I don’t remember WHO I saw, but I know people were in there trying to get in touch with their loved ones at home. When it was my turn to use the phone, it rang and rang and rang, but no one picked up. I was worried, but what was I going to do about it? My turn to call was over, so I had to go back to class. At some point in the day, I found my way back to a payphone (remember those?), called home and finally got through. Everyone was ok, so I could stop worrying about that.

The rest of the day, honestly, was a blur. I felt broken. I felt confused. I felt like I wasn’t safe. I went home and watched the television until I went to bed. Still numb.

The next day was September 12, 2001. I can’t tell you what the sky looked like. I can’t tell you if there were clouds or if the weather was unseasonably warm. I can tell you, though, that it was quiet. Eerily quiet. Living so close to the Philadelphia Airport, I had grown accustomed to hearing the airplanes flying in the sky overhead. Not today, though. All air travel was halted and the skies were quiet.

I drove to school and parked my car and started school like a typical day but, like I said before, it was quiet. My peers weren’t as talkative as they usually were. We were all trying to process what had happened and the result was an unsettling silence throughout the school hallways.

Homeroom started and homeroom ended. I walked to my English class and sat in my seat. There was always a bell ringer assignment on the board for us to work on while we were waiting for class to officially start. I took my notebook out, opened it up and couldn’t help but notice the page I had written in the day before. There it was, right on the top of the page: Tuesday, September 11, 2001. That was the “before” to the “after” we were now living. When I had written that date the day before, it had no meaning to me. It was merely another date. Another day at school, another English class, another part of my Senior year in high school.

What an insanely different world we had lived in literally 24 hours prior.

Now that I’m a parent, a homeschooling parent none the less, it’s my responsibility to teach my kids about this horrific event. As much as I would love to just completely avoid the subject, I would be doing them a disservice by neglecting to teach them about what happened. When they’re older, I’ll let them watch some of the news coverage from that day. It’s still hard for me to watch, even all these years later, so I’ll be waiting until they’re at least teenagers to introduce footage to them.

For now, though? We’ll learn about the past through books. At 6 & 9 years old, they really enjoy learning through the Who Was show on Netflix and by reading the Who Was books, so I’ll be sharing What Were the Twin Towers? (What Was?)

with them this year. Even if you’re not able to teach your kids about the events of September 11, 2001 specifically on September 11, if you feel they’re old enough to start learning, definitely check this book out.

Get the latest and greatest from 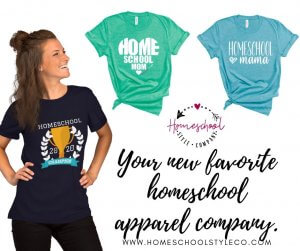 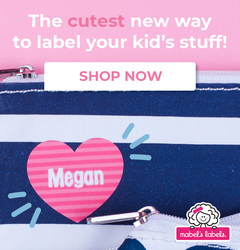 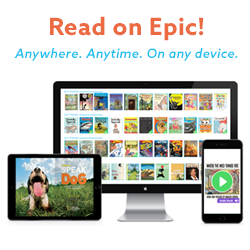 There's no working lights in the basement, so I ha

Saturday night take out from our favorite local Ch

Happy Monday, Mamas! How was your weekend? We got

There isn't much better than enjoying one of your

"The ocean stirs the heart, inspires the imaginat

It's feeling like fall, so that means comfort food

When the newspaper photographer arrives for the ho

Already wondering what you're going to make for di

This coming Friday is the anniversary of one of th

You know the "If You Give a Mouse a Cookie" book?

To say we're excited is an extreme understatement!

Think there's nothing to do with the kids since so

Oh, homeschooling families! Have you started your

What are your favorite ways to enjoy fresh tomatoe

Do you have approximately a bajillion travel and k